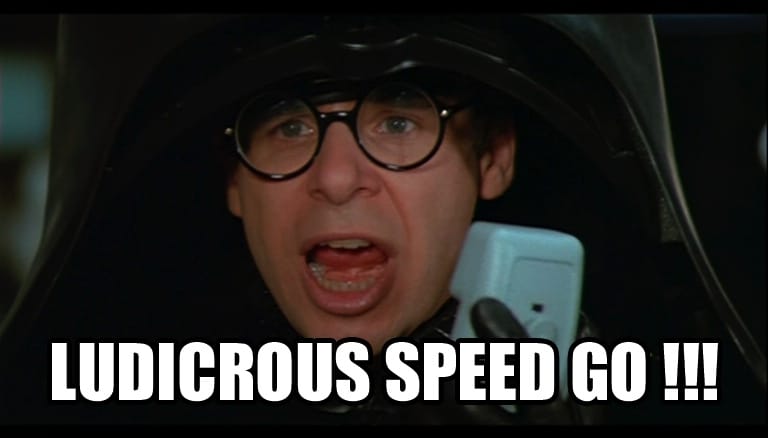 Everybody wants a fast website. Speed, speed, speed. Not only does it benefit your readers, but it benefits you, and in more ways than you might think. Did you know Google gives faster sites better rankings? It’s true.

But when do most people think about making their website fast? Once it’s all wrapped up and done, when they find out it’s not as fast as they’d hoped.

The bummer is, while the things you do to speed up your site on the front end benefits your readers, it’s the stuff on the back end that Google cares about.

So, to really make your speed of your site matter—to search engines as well as to the humans who’ll read it—you’ve gotta pay attention to both sides of the equation.

To that end, let’s take a look at the top three factors I see time and again make the biggest difference to your website’s speed.

(Are there more than three? Sure. There’s always more. It’s the internet, after all. But if you handle these, you’ll be 95% of the way there.)

Hosting: Don’t be a sardine

Most people look at one thing when choosing a web hosting company: price.

Choose a cheap host, and your website performance will suffer, guaranteed.

Why? Because in order to make money, most cheap hosts will overstuff their servers, packing as many accounts on a server as they can, like sardines in a can.

As you can imagine, that hinders performance, slowing down all the sites on that server. Why? Because the systems those sites rely on are fixed, and the “pipes” running in and out are the same size regardless of how much is being asked of them. So, all those sites have to compete to send and receive all their data underneath the same umbrella of resources (cpus, bandwidth, etc.).

However, there are higher quality hosts out there that manage their servers much better. Because WordPress powers a third of the websites on the interwebs, a handful of smart companies have tweaked their servers specifically to the demands of the WordPress environment. Unsurprisingly, they’re called “managed WordPress hosts”, and sites running on them tend to be much, much faster.

Here’s the shocker: in some cases, you can get high-quality, managed WordPress hosting for not much more than cheaper, smushed hosting (that’s what I call it). Awesome, right?

My favorite managed WordPress host and #1 recommendation is Flywheel, hands-down. And they start at $15/month, which is amazing. (And yes, my site is on Flywheel.)

Now you’ve got a fast host. Good job – you’ve just solved at least 75% of your problems.

When it comes to themes, you want a theme that doesn’t add everything under the sun just out of the box. Many “all-in-one” themes you find these days have every feature imaginable, trying to appeal to the largest amount of users: “site builder” tools, photo and video galleries, visual effect scripts, sliders, you name it.

But all that stuff slows your site down, whether you use it or not.

Instead, my approach is to use a clean theme that only has what you need, and nothing you don’t. If we need to add something, we do. And if we can take something out, we will. For instance, I have certain code snippets I add to every site I build from the get-go that help reduce cruft.

Not only do many themes add every option under the sun (and you only end up using two, maybe three at most), but some themes add fonts that get downloaded every time someone loads your site. Unless you or your designer disable those, you’re wasting bandwidth, time, and slowing down other things from loading.

When it comes to plugins, the same principle applies: only add it if you need it, remove it if you don’t.

There are lots of ways to use simple bits of code instead of bloated plugins to achieve the same end result. If you’re not comfortable adding those sorts of things, I bet I know a guy who does… 😉

Chances are, you’ve heard of “caching”? Caching is about storing your site’s assets (files, photos, etc.) so they can be readily served up to your visitors. It’s essential, and an important piece of the speed puzzle.

But let’s say you have a photo of you on your site. Even with amazing caching, which would load faster?

No surprise there. Optimized images—both cropped and smushed to get rid of the extra bits— are a fraction of the original image’s file size. We’re talking 50-75% faster, in many cases.

That can reduce loading time from 15 seconds down to less than a second. And that’s just one image.

Repeat that effect site-wide, and… yeah, you get the idea.

Speed: There’s so much you can do

From starting with a fast host to eliminating cruft, reducing file sizes and caching the whole thing, a speedy site is within your reach.

And if you need to speed up your site but don’t think you can handle it yourself, feel free to get in touch.

Sign up here to receive updates on new articles, discounts, and more.